Domestic workers worldwide have the same basic labour rights as other workers, including:

Most countries around the world have specific legislation for this sector.

In Italy, the Law No. 339 on Domestic Work of 1958 includes working time, weekly rest and holidays. However, this law did not treat domestic workers as equals compared to other workers in situations including maternity leave or protection from unfair dismissal. These are covered by a national collective agreement. In 2013 was approved the National Collective Labor Agreement on the discipline of domestic work to which several federations, unions and domestic work associations signed. The Contract governs the domestic employment relationship at a national level.

In Spain, an agreement entitled the “Toledo Pact” was agreed between the main political parties, employers and unions and was approved in 1955. It guarantees some rights for domestic workers as part of reforms to the social security system but was limited to employees who worked for more than 80 hours per month for the same employer. In 2006, the unions and employers reached an agreement on social security, to include the domestic workers into the general security system.

In South Africa, domestic workers' rights are protected by the Constitution and labour regulations. For example the domestic worker is entitled to up to 4 consecutive months maternity leave. The dismissal of an employee for any reason related to her pregnancy is automatically viewed as unfair. However, the employer does not have to pay the employee for the period during which she is off work due to her pregnancy.

In Argentina, the law on “Personal Household Staff” (Law 26.844) recognizes the same rights for domestic workers as those granted by that law to the rest of the wage-employees. With the passage of this regulation, the legislative emphasizes that domestic workers should be treated the same as any other worker.

Under US law, the New York Domestic Workers' Bill of Rights covers only full-time employees including immigrants, not relatives or part-time workers such as babysitters. 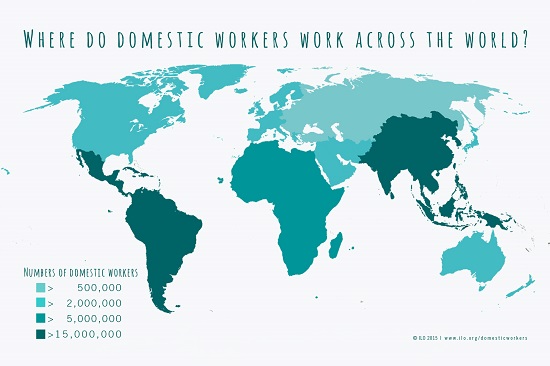 Why do some employees get paid under the table?

Would you pay your nanny under the table?